This weekend, my band played a gig on Saturday and Sunday in Monterey. On the third-to-last song on Sunday, I started to have problems with the sound coming out of my bass guitar. The sound cut in and out and had some distortion and static. I managed to get through the last few songs by wiggling the cable and standing very still (to prevent jostling the connection). After I unpacked my gear, I set about finding and correcting the problem. I found two separate problems:

1. The bass->amp cable had an intermittent short in one end caused by a strand of the shield coming into contact with the signal conductor. I've seen this failure mode many times in guitar cables. The constant motion and bending causes the shield wires to fray and migrate around inside the connector. The fix was to cut off the stray strands, and wrap some tape around the center conductor in the connector.

2. The 1/4" phone jack in the bass guitar itself would fail if the plug was pushed in just the right direction. This bass uses active pickups and senses when the ring of the phone jack is connected to the sleeve (ie a mono plug is inserted into the jack) to supply power to the active pickups. This way, the bass will not run down the battery when it's not plugged into the amp. I am not sure which contact was failing intermittently, but it was probably the sleeve or ring. I replaced the phone jack with a 4-pin "mobile radio" connector. These connectors are very rugged and have a threaded ring to secure the plug into the socket. No amount of twisting or pushing will cause it to break contact. I used three of the pins (two are shorted inside the plug to provide the battery-saving feature). I made a special cable that converts the 4-pin connector on the guitar to a standard 1/4" phone jack on the amp. The only downside to this setup is that the plug cannot rotate, which is one benefit of the 1/4" phone jack -- it helps to get kinks and twists out of the cable while walking around or moving the bass around stage.

Anyway, I'll post about this again if it turns out to be a really bad or really great idea. 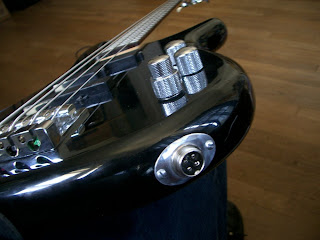 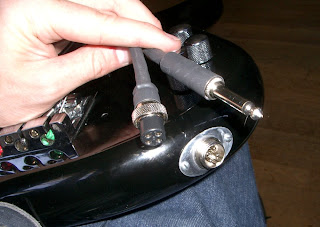 Microsoft recently rebranded their "Live Search" maps as "Bing". The only notable feature is that it has a bird's-eye-view, which is lacking from Google Maps. I use the bird's eye feature often because online real estate sites like redfin, trulia, etc generate links to show the houses that are for sale. Recently, Bing maps became much less usable. Whenever the site loads, an obnoxious pop-up demands that I install the 3D viewer client -- complete with shady-as-hell setup.exe file. I don't see any way to permanently decline the 3D viewer. There is also a stupid list of mapped items on the righthand side of the screen. This might be a useful feature, but it should be possible to permanently disable (especially when there is only one thing in the list!). The left side of the screen is dominated by ads. Here's what it looks like: 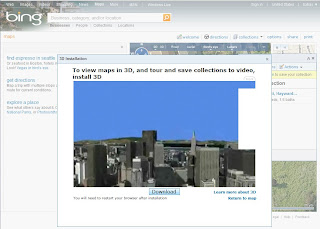 Even after dismissing the popup with its annoying bandwidth-hogging flash movie, there is still very little map actually visible on the screen. The solution is to write a greasemonkey script for Firefox. This tool allows users to write javascript that is executed for a pre-determined set of webpages (like http://www.bing.com/*). Here is what Bing looks like after my greasemonkey script was setup: 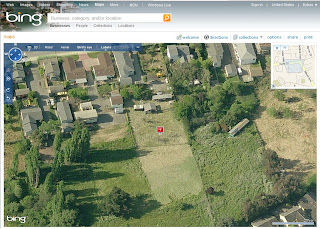 Aahhh, that's so much better. It actually looks like a map now, and I don't have to spend at least three clicks closing stupid windows everytime that I see a Bing link somewhere on the 'Net.

Search for greasemonkey to find out more about this tool. Here is my script (note: I am a rank-beginner when it comes to javascript. I am sure there are numerous problems with this code, but it does work):


// hack to get AJAX to redraw the map after greasemonkey altered the map width
window.resizeBy(-1,0);
Posted by Ben Krasnow at 12:26 PM No comments:

In this post, I will describe the setup that I use to record my drums while practicing. I recently bought a Zoom H4 Handy Recorder. It works really well, and I think it is a worthwhile piece of equipment. One of its really nice features is the ability to connect two external sound sources and also supply phantom power. The device allows individual level adjustment for each source, and will also mix the two inputs into stereo. I have it setup with a Tama Rhythm Watch RW105 metronome, and an omni condenser microphone. The mic is normally used for testing the frequency response of home theaters and it has an extremely flat response from 20Hz to 20kHz. This doesn't necessarily make it a great overhead mic for drums, but it's what I have.

The output of the H4 goes into earbuds, then I wear large earmuff-style hearing protectors over the buds. This lets me adjust the volume of the metronome and drum kit (from the single condenser mic) very easily. I can also hit record on the H4, and make a quick track so that I can critique my playing very quickly. This setup has proven very useful. 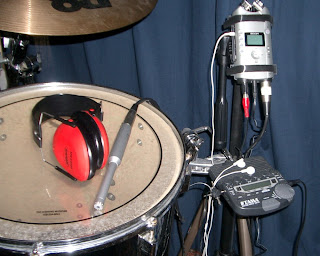 Posted by Ben Krasnow at 8:53 PM No comments: