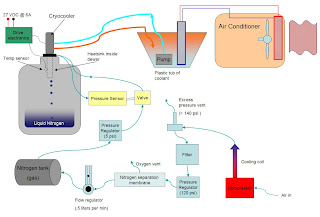 Here is a system overview. 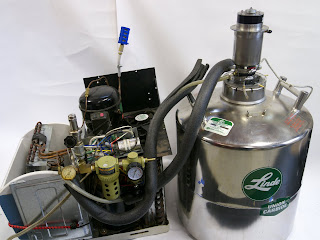 This photo shows liquid nitrogen dewar (on the right) with the cryocooler mounted on top. The device on the left is a window air conditioner that was converted into a water chiller with liquid cooling lines running to the cryocooler. The small compressor on top of the air conditioner pulls air in from the atmosphere and sends it through the nitrogen separation equipment. 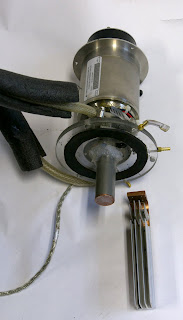 The cryocooler with custom heatsink. When the unit is running, the heatsink gets cold enough to condense nitrogen, and the newly formed liquid will drip off the heatsink. 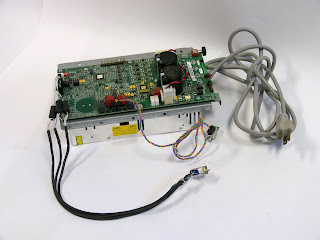 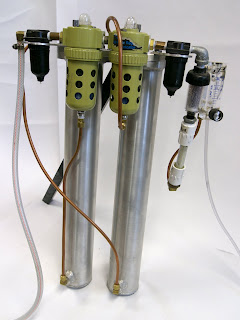 This is a silica gel desiccator that I built from aluminum. It also contains coalescing filters and carbon filters to remove oil droplets and vapor from the compressed air stream. 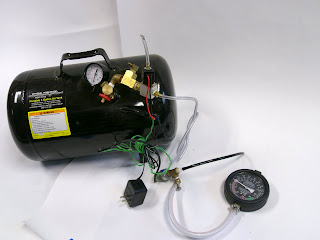 This is the nitrogen storage tank with pressure sensor, valve and gauges.

Liquid nitrogen experiments:
Make Ice Cream
Mix a standard ice cream recipe in a large bowl.
4 cups half-and-half
½ cup heavy cream
¾ cup white sugar
2 teaspoons vanilla extract
pinch of salt
Add liquid nitrogen slowly while stirring the mixture. As the nitrogen boils, it will help froth the ice cream as it freezes the mixture very quickly. The rapid freezing produces small crystals and a fine texture in the ice cream.
Freeze a balloon
Inflate a standard latex balloon with air, then submerge in liquid nitrogen. The balloon will deflate dramatically as the internal gasses contract and even condense. After removing it from the nitrogen, it will reinflate as it warms. This process can be repeated many times.
Perform magnetic levitation on a superconductor
Certain high-temperature superconductors can be used at the boiling point of liquid nitrogen – 77 K. Once the material is cooled, it will exhibit “magnetic mirroring”, so that a permanent magnet can be levitated above the superconductor as its magnetic field is reflected. The best type of magnets for this are small (5mm dia or less, by 2mm long) neodymium-iron-boron magnets.
Make liquid oxygen
A variety of common gasses such as oxygen can be liquefied by passing them through a copper tube submerged in liquid nitrogen. Liquid oxygen can accelerate the combustion of common objects by creating a localized pure-oxygen environment.
Ping-pong ball spinner
Use a needle to puncture a ping-pong ball, then bend the needle to make the hole somewhat tangential to the ball. Repeat this on the other side of the ball with the hole “facing” the opposite direction as the first like a rotary garden sprinkler. Submerge the ball in liquid nitrogen for about 30 seconds, then remove it and place on a large flat surface. The ball will begin spinning as the captive nitrogen boils and streams out through the holes.
Effect on semiconductors
Connect various LEDs to a 9V battery with an appropriate current limiting resistor, eg 1Kohm. Submerge the LED in liquid nitrogen and note its color and brightness. As the semi-conductor cools, the band gap changes, causing a color shift. Some have also suggested the color shift comes from the spacing of the crystal lattice changing due to the very cold temperatures. Different LEDs will show varying degrees of color shift, so try a few from different manufacturers.


You can generate liquid nitrogen (LN2) in the comfort of your own home with some parts found on eBay. I have proven that this is possible by purchasing surplus equipment and assembling it as described in this post. I spent over a year searching eBay, so these parts are not really easy to find, but the total bill for the whole system was under $500. The device consumes about 300 to 400 watts of electricity and needs no consumables (just atmospheric air). The LN2 is produced at a net rate of about 1 liter per day. This comes out to 9.6 kWh/liter or $1.15/liter, which is substantially cheaper than having the local welding store fill up a thermos (granted the thermos must be cooled as it is filled, thus requiring more than its capacity of LN2).

The most important part of this system is the cryocooler. This is a device that employs a thermodynamic gas cycle to pump heat through a very high temperature gradient. Many of these devices are self-contained and require only an electrical input to start pumping heat. The crycooler that I used was removed from a surplus RF filter which used the cryogenic temperatures to maintain a superconducting RF filter. http://www.suptech.com/home.htm
The crycooler itself has been fairly well documented:
http://books.google.com/books?id=POLgG5mma6IC&pg=PA75&lpg=PA75&dq=sti+cryocooler&source=web&ots=ZTMqWVv8Pu&sig=HbbSzGgnD3fIFxyKJjxFLuNEa9E&hl=en&sa=X&oi=book_result&resnum=1&ct=result

I converted the cryocooler to be water-cooled on the hot end and attached a heatsink to its cold end. In operation, the cold end with the heatsink is inserted into the top of a large dewar. Eventually, the interior of the dewar gets so cold that the air will condense into a liquid and drip down to the bottom.

The second key part of this system is the nitrogen separation membrane. The is a device that accepts normal air, and produces relatively pure nitrogen. The waste products (mostly H2O, O2 and CO2) are vented into the air. Information regarding these membrane units is easy to find on the internet, but good luck buying one! They are nearly all produced for huge industrial installations, and those manufacturers will not even return phone calls from interested hobbyists. Asses! I spent a LONG time searching eBay, and eventually found a very compact unit, which was perfectly suited for this project. The nitrogen purity is dependent on the mass flow rate through the device. This means the flow must be carefully monitored and controlled. I will make another post that describes some fun stuff to do with LN2.
Posted by Ben Krasnow at 9:33 PM