I have built a few projects that involved the construction of a hollow pyramid by assembling triangular faces. As the construction progressed, I quickly realized that the proper miter and bevel angles of each pyramid face are not trivial. ie They are not 45*, 22.5*, 60*, or any other common construction number. The reason is that the faces of the pyramid meet each other in a compound angle, thus making it difficult or impossible to cut the pieces without first calculating the miter and bevel using geometry. 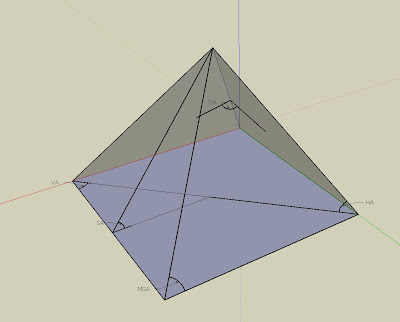 I made this diagram in Google SketchUp with the dim_angle.rb plugin (http://www.crai.archi.fr/RubyLibraryDepot/Ruby/em_geo_page.htm) . The angles are as follows:

When building pyramids, the VA and SA are inputs to the following equations. HA is an intermediate step, and the MGA and DA are outputs. These two output angles indicate how the miter and bevel adjustments must be set on the saw to cut the pyramid faces.

For a pyramid with a square base, the VA is 45*. The SA is chosen by the designer to give the pyramid a desired aspect ratio. High SA values, would make the pyramid very tall relative to the base. For this example, let's choose 60*. The first calculation is for MGA:

Depending how your saw measures bevel cuts, the proper bevel angle setting is given by just this part of the equation:

So, set your saw's miter gauge to the MGA (63.43) and the bevel to 37.76, and cut away. I'm sure you math guys that really loved the "fun" trig identities will have a more compact form for these equations, so feel free to post them.
Posted by Ben Krasnow at 12:50 PM