My cat is a voracious eater, so it is not possible to leave out a weekend's worth of food when I take a short trip away from home. He would eat all of the food in the first few hours, making himself sick! In order to dole out his food in small amounts, I built an automatic feeder out of "found" parts and minimal amounts of machining.

The system starts with a standard "vacation timer" for home lighting. This particular model has a plastic tab for each 15-minute increment of the day. By flipping the tabs in/out from the center, any program can be constructed that has 15-minute resolution. 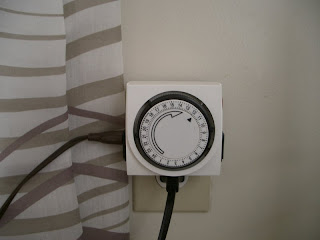 The power cord from the "vacation timer" goes to a photographic enlarger timer. This device allows the AC power to flow through it for a pre-determined number of seconds. I left the "timer" switch in the on position, so the device begins timing as soon as the AC power from the vacation timer is received. This device was indeed homemade, but not by me. I found it at a flea market years ago. 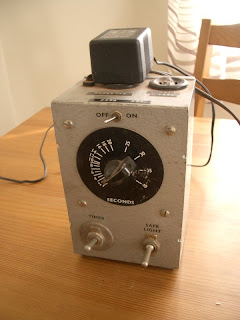 The power from the enlarger timer goes to a standard AC wall transformer, and then to a gear-motor on the feeder. 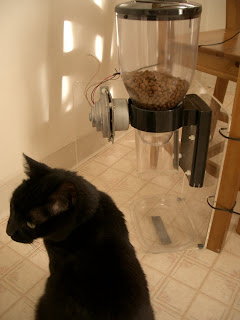 The motor is rated for 24 VDC and originally came from an HP laserjet. I am running it on a 9VDC from the wall transformer, and I also used a ballast resistor to get the motor turning as slowly as possible.

The motor is connected to a dry cereal dispenser (sold for humans!). The dispenser had a knob that could be turned to dispense a quantity of cereal, and I replaced that knob with the motor's shaft. The dispenser's hopper tapers down to a straight-walled cylinder and there is a flexible rubber butterfly valve (of sorts) that fills the cylinder's diameter. The valve has 6 blades, and as it turns, it meters out a specific volume of food. I have the enarlger timer setup to turn the valve 1/6 of a revolution so that the same amount of food is dispensed each time. I also added an output chute to keep the cat's paws away from the butteryfly valve. I also built a sturdy base out of acrylic and wire-tied the whole contraption to a table leg.

This feeder is actually the second version that I have built. The first version was based on a meat grinder (using the auger to meter out food without any blades or grinding plate). It didn't work as well because it had a tendency to mash up the food, or get jammed, and generally not work smoothly and consistently. The new version with the cereal dispenser has worked extremely well.
Posted by Ben Krasnow at 11:03 AM