Adhesive for polypropylene and other low-energy surface plastics

I recently had the task of gluing two pieces of polypropylene plastic together. It sounds easy, but polypropylene is a plastic with very low "surface energy" -- meaning it's difficult for most adhesives to "wet" the surface and make a good bond.

This problem of not being able to wet the surface can be seen when dripping water on a recently waxed car. The water forms beads and quickly rolls off the surface. If the car's surface has not been waxed in a long time, the water droplet may stick to the surface and form a sheet or stream of water flowing on the surface. The difference is that the wax provides a much lower energy surface to the water, which has a difficult time sticking to the wax and forms a bead and rolls away.

Plastics with low surface energy (polypropylene, polyethylene, etc) are used for food containers and other vessels because of their mechanical properties and also their inert surface that allows liquids to easily roll off. So, how to glue them? I searched the web and found this product:

3M Scotch-Weld DP8005. It has some magical composition that allows it to wet very low energy surfaces.

It's pretty expensive -- a little over $20 at McMaster, plus the special plunger (another $8). The tube of adhesive and plunger are intended to be used in a dispenser that works like a caulk gun. They also sell a mixing tip that swirls the two parts of the adhesive before dispensing. That's all fine, but I prefer to just mix with a nail on a piece of paper. I bought only the tube and plunger and had no difficulty dispensing, mixing then applying with a nail.

The adhesive itself is pretty weird. It's gritty, like it contains tiny glass beads or sand. I applied the adhesive to my project (polypropylene bottle and flat slab of polypropylene), and put the pieces with very light clamping pressure in an oven at about 80*F for about six hours. I shut off the oven and went to bed. The overnight temperature in my shop was probably 50*F. 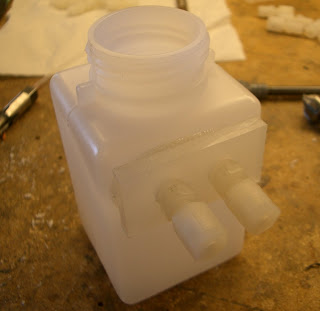 The next day, I took the parts out of the oven and was glad to see the adhesive worked very well. It made a very strong bond -- strong enough for me to drill and tap two holes with 1/8" pipe threads in the 1/4" thick slab that I glued to the bottle. The plastic showed no signs of coming loose. I made six bottles like this, but didn't have a spare bottle for destructive testing.
Posted by Ben Krasnow at 11:36 PM