The next step in the beer fermenter project is to mount some copper blocks to the outside of the stainless tank. The purpose of these blocks will be to thermally couple two peltier devices to the surface of the tank. The tank is cylindrical (near the top) and the peltiers are flat, so the copper blocks must be curved on one face, and flat on the other. I started by cutting off some chunks of copper and milling the edges square. 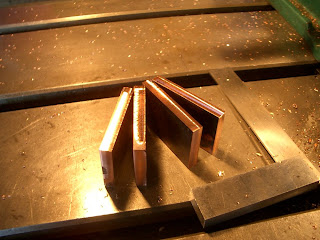 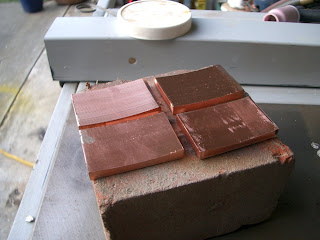 Next, I used a long end mill to profile the sides with a radius that matches the outside of the stainless tank. My plan was to silver solder the copper blocks to the stainless tank exterior. This turned out to be a very bad idea. I started by fluxing the copper and stainless, then separately covering them with a thin layer of silver solder. No problem yet. I put the semi-cooled block onto the tank, and planned to heat the tank and block and let the two solder-covered surfaces melt together. This started working, but then the stainless expanded dramatically under the block. The copper was lifted a clear 1/4" off the surface near the edges, while the center was making contact. I removed the heat, and looked inside the tank to find this new disaster: 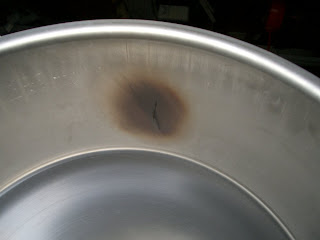 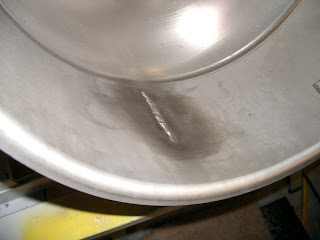 Luckily it wasn't too difficult to repair the crack. Since the crack went clear through the tank wall, I had to fight the silver solder which was molten and trying to flow into the weld puddle. The copper blocks must be making good thermal contact, since I maxed my TIG machine out at 200A, and it was just enough to comfortably weld. 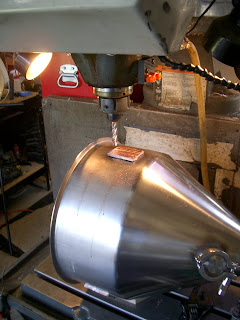 There are two copper blocks (each made of two pieces of bar). In order to avoid the silver-soldering nightmare again, I used silver epoxy to join the copper to the tank. After both blocks were attached, I mounted the assembly in the milling machine, and flattened the faces.

If I were going to do this again, I would profile the copper backside, flatten the face, then use silver epoxy to attach it to the tank. 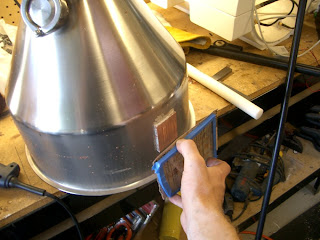 UPDATE: This method did NOT work. I was not able to hold the glass without rocking it very slightly. This created a very smooth, but curved surface on the copper. It was unsuitable to mount the peltier.

Here, I am removing the milling marks with sandpaper mounted on a 1/4" thick glass plate. This took a very long time. In fact, I am still "going up through the grits" right now. The next step will be to weld a small threaded boss on either side of the copper blocks. This will serve as an attachment point for the peltier heatsink. The peltier itself will be pinched between the copper and the heatsink.
Posted by Ben Krasnow at 9:08 PM