The serious TIG welders have two flow regulators on their argon supply -- one for the torch, and the other for the purge argon on the backside of the weld. I found some cheap flow regulators on eBay, and I made a manifold for the two I bought plus the original regulator. I've imagined situations where three regulators might be helpful like welding a gusset on the outside of a tank. The gusset would need backing gas in addition to the torch side, and the inside of the tank would need to be purged as well. Who knows. 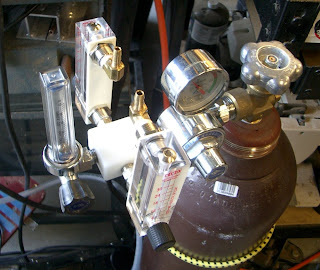 I made the manifold itself out of a block of white Delrin with four 1/4-18 pipe threads cut into it. The original regulator (on the left) has 1/4-18 straight threads. I just ran my tap really deep into the Delrin so that the regulator would fit in. It's very easy to make metal fittings seal with Delrin and no Telfon tape is necessary. The Chinese argon pressure regulator also had a 1/4-18 female straight thread which was intended to seal on the end of the pipe. A regular 1/4" brass pipe thread nipple worked just fine and presumably bottomed out and sealed on its end.
Posted by Ben Krasnow at 4:42 PM