Take a look at this screen capture from a video file. 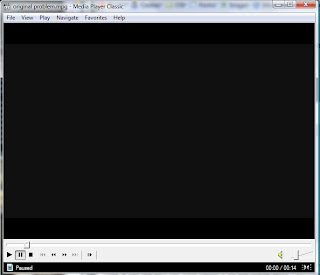 The video itself is just a black (R:0, G:0, B:0) matte. Or at least, it is supposed to be. Notice that the 16:9 video portion is actually dark grey -- much lighter than the surrounding true black border. I only noticed this recently, even though it has probably always been this way on my computer. Almost all of the video watched on this computer is from youtube, which goes through a different video display route than DVD video or video played from individual files.

Initially, I thought the problem was caused by Premiere itself. I created a very simple video with just a few seconds of solid black matte. When viewing the preview window in Premiere, it looked fully black. After encoding into MPG, it looked dark gray. Clearly, it must be a problem with Premiere or its encoder. I was encouraged by this bug report:
http://forums.adobe.com/thread/387845

After upgrading to 4.0.1 and spending many hours fighting with codecs, filters, shaders, etc, I discovered that my video card driver actually has the final decision about black levels. Even if all of the video decoding software outputs a "0", the video card driver may still adjust this to be dark gray in order to be compatible with analog television output. I had to upgrade my Nvidia driver, which now includes the option to actually use 0-255 range in the video output. 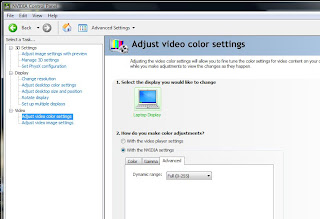 The alternative to 0-255 range is 16-235. I guess analog TVs and maybe even digital TVs are setup to display a value of 16 as complete black and 235 as complete white. Why? I have no idea. It might have made sense when dealing with an analog signal, but it makes no sense with digital signaling. The difference in tonal range is technically known as pc.709 and rec.709. If you start reading about color spaces and transfer functions, your head might explode. Just try searching for YUV rec.709 YUY2 YV12 4:2:0