I am currently working on a project where I need to replace a standard mouse ball with a non-metallic equivalent. Normal mouse balls are built from a steel core that has been coated with a thick layer of rubber. I can't use any metal in my project, so I must find a replacement. The main requirements are:

My first solution was to use 7/8" glass marbles. These are not easy to find, but they are available. The problem is that the marbles are not perfectly spherical, and they are not nearly as dense as the original mouse ball. The lower density means the ball weighs less and will not track smoothly on the mousepad surface, since it sometimes skips and hops. I was able to etch them with hydrofluoric acid, spray them with primer paint, then coat with with spray-on rubber. They worked OK, but I have a better solution now.

I found a source of 7/8" dia zirconium oxide balls (http://www.ortechceramics.com/). This stuff is a ceramic, but 2-3 times as dense as glass. It's non-metallic, and the balls have very high sphericity. The problem is that the balls come very highly polished, and the paint will not stick to them. I tried etching them with standard glass etching cream, but there was no effect.

I found that a local lab supply company (http://www.lab-proinc.com/) sells 50% hydrofluoric acid (HF). I bought some and initially made a small 10% dilution. The ZrO2 showed no etching after 1 hour of full submersion in the dilution. I upped the concentration to 20%. Still no effect after 30 minutes. Finally, I submerged the ZrO2 in straight 50% HF. After 10 minutes, I could see the shine starting to disappear from the balls' surfaces. After 20-30 minutes, the balls appeared to have enough etching so that they would hold paint well. 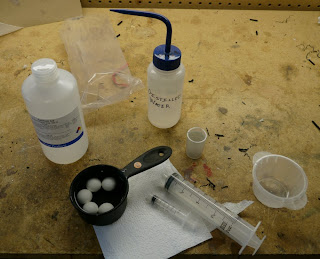 Hydrofluoric acid is scary stuff. There are reports of it penetrating skin painlessly then dissolving bones and causing blood toxicity. Standard nitrile or latex gloves only provide splash protection -- ie if the HF is spilled on the glove, immediately remove the glove, and get a new one. HF will penetrate the gloves if left in contact for too long.

I was surprised to see the 50% HF was actually 'fuming'. When I left it in the open container, I could clearly see vapor droplets coming off the surface. If I blew across the surface of the HF, more vapors were produced. I am not sure if it is reacting with water in the air/breath or what. I didn't expect 50% to be fuming.
Posted by Ben Krasnow at 5:47 PM